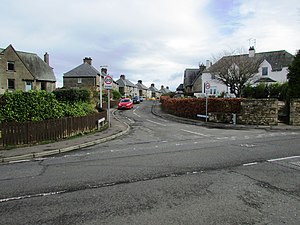 Lomond Crescent runs between Pleasance and Newton Road, passing to the north of Pleasance House and Falkland Primary School. The junction with Newton Road comes just before Canonbury (later the Manse). The Crescent was built around 1921 to provide additional housing for the village.

"[The Falkland Town Council] secured a site in the Pleasance, where they mean to erect a Crescent of 40 houses, with five, four, and three rooms, and they are so advanced with their scheme that they are inviting tenders for brick work, joiner work, etc. They are also proposing to borrow the sum of £50,000 upon the security of the rates, property and revenues of the burgh for the purpose of meeting the cost of construction of those houses, which are for the working classes of the burgh.[1]