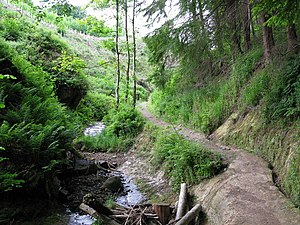 The Maspie Den is a well-known beauty spot in the House of Falkland designed landscape, comprising a steep-sided wooded valley carved out by the Maspie Burn. There are a number of cascades and waterfalls, the biggest of which is referred to at the "Yad".

"Recently a representation was made by the Town Council of Falkland to Lord Ninian Crichton-Stuart to have Maspie Den opened to the public. His Lordship has agreed to do so on the afternoons of Saturday during the Summer months. It is proposed that the admission should be by ticket obtained at the Palace Guides Room. It has just occurred to me, however, that his Lordship may run some risk in admitting the public to the Den. As you are aware the Maspie Burn is crossed at several places by wooden bridges of a not particularly substantial nature, the sides of the stream are, at a good many places, precipitous and the paths are narrow necessitating wooden guards at certain points. In the event of any member of the public being injured through the defect in the bridges or by falling into the stream would his Lordship be in any way liable to a claim of damage? If he opens the Den as proposed, can any liability for an accident be guarded against by its being so stated on the ticket of admission. Perhaps you will kindly write me as to this matter by an early post as it was proposed to open the Den on Saturday first.

P.S. If a sentence to the following effect be added to the ticket of admission, which I have omitted to say is free, would it safeguard the proprietor against risk: “The Den is open to the public on the distinct understanding that the proprietor will not be responsible for any accident which might occur in any way whatsoever to any member of the public visiting the Den.”[1]