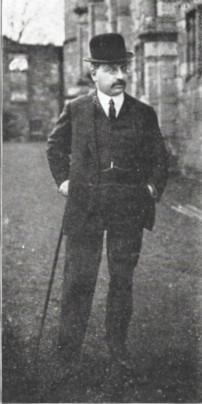 George Gavin in the Palace courtyard

George Gavin was the factor to the Falkland Estate from 1904 onwards. As factor, he lived in Falkland Palace; for an interim period as estate overseer (acting factor) following the death in 1902 of the previous factor, Major William Wood, he lived at Lomondside House.

"The factor on the estates is Mr Geo. Gavin, a gentleman whose sterling worth and fair and open mindedness and straight dealing have won the confidence and esteem of all the tenants, big and small. He has held the office for six years, since May, 1902, and he succeeded the late Major Wood, who factored the property for the long period of thirty-two years. [...] Mr Gavin is a member of Falkland Parish Council, a member of the Executive Committee of the County Council, and a Director of the Fife Agricultural Society."[1]

"Major Wood was a Protestant, but it was an important factor in the appointment of Mr Gavin that he was a Catholic; he became very involved in dealings with the priest and in the arrangements for the Chapel Royal in the Palace. George and his wife are both buried inside the Memorial Chapel."[2]