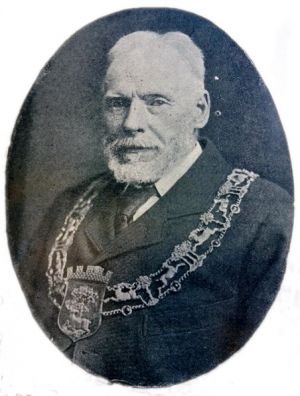 William Page (died 1903) was a builder, and Provost of Falkland from 1879 to 1903. In his youth he had spent some time as a “digger” in Australia. He was in charge of much of the masonry work on the restoration of Falkland Palace. He was elected Provost of Falkland in November 1879, having acted as interim Provost since Charles Jackson’s resignation in May.[1]

Page lived at 1 Royal Terrace, having built the whole terrace himself. The Provost's Lamp was accordingly mounted outside the house, and its bracket remains there.