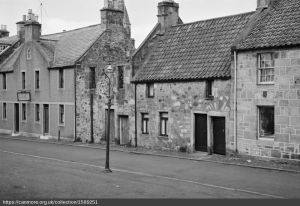 Cross Wynd runs from north to south, at right angles to the High Street, It starts at High Street, continues to a cross-roads separating Brunton Street and Horsemarket and ends at Back Dykes.

Much of the west side of Cross Wynd was demolished to form Brunton Green.

Until the drainage works in 1901, a burn ran down the centre of the Wynd, bringing yellow sand from the hill. Housewives would bring their pots and pans here to wash and scour them.[1]

From north to south, the houses on the east side are: